Whenever We Follow PBB, SUPP and SPDP, We Got 3 William Wallace Sr. 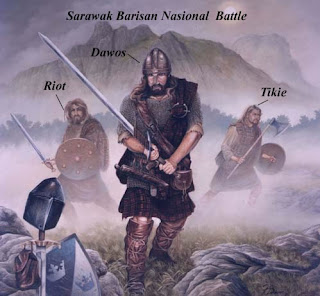 “I communicated our expectations to the prime minister when I submitted the names of the four MPs from SPDP. I’ve put across my views, but its the prerogative of the prime minister as BN chairman, to make the appointments,” he said. “

In the March 8 general election, the rural-based SPDP scored 100 per cent victory, with increased majority in all the four Dayak-majority seats. Prior to the dissolution of parliament, the SPDP only had one representative in the administration, in Deputy Minister of Rural and Regional Development Datuk Dr Tiki Lafe.

The four names forwarded to Abdullah are Dr Tiki, Datuk Jacob Dungau Sagan (Baram), Datuk Seri Tiong King Sing (Bintulu), Jelaing Mersat (Saratok) and Senator Paul Chek Nyuk. The election saw Tiong, who is also SPDP treasurer-general, retaining Bintulu with the biggest majority of 14,965 votes, against DAP’s Lim Su Kien, , who polled 8,663 votes in a straight fight.
Mawan said it was high time a representation be considered, especially from Sarawak’s indigenous minorities, given that all the rural seats had again given the mandate to BN.

The BN triumphed in 30 of the 31 parliamentary seats in the State, conceding only the Bandar Kuching seat to DAP.

The Orang Ulu community had lobbied for fourth-term Baram MP Jacob to be considered for a ministerial post on the rationale that he would be able to facilitate development in the rural constituency, which was as big as Pahang, but was the country’s least developed due to its vast size.

Dr Tiki, who hails from the minority Bidayuh community, is known for his political consciousness and is regarded as a progressive leader."

Today's cabinet line for the 2008-2012 announced by Abdullah Ahmad Badawi and this is his second time told that Barisan Nasional will go down to the root of any kind of issue so that the people will never ever been neglected again. That was the same as his promise in 2004 to be the Prime Minister for Malaysia. Hope that the new cabinet will figure out the national future which will be more secure, peaceful and prosperous. There will be no neglect of minority ethnic such as Sabah & Sarawak aborigines and Arang Asli.

I am sad to see that there is no Bidayuh Barisan Nasional candidate being appointed for the Federal Portfolio. Very sad to see that the Bidayuh is still crying for attention and pamper as a baby panting for milk. This is the price that we have to pay under PBB and SPDP. I am now getting to understand why Riot, Ranum and Jerrip draw their picture on the SUPP canvas. Because they saw the struggle under the PBB and SPDP. What is wrong with Dawos, Riot and Tiki to be at least a deputy minister? We have proved our support to Barisan Nasional and threw juicy stools to the oppositions and independent candidates and at the end these 3 candidates are still under the state ministry. Something is wrong here and this is the precious gift from Taib and William Mawan for Bidayuh.

The mushroom has withered before the sun rise. This is the new way of Sarawak politics which has mistreated Bidayuh since the glory of SNAP until PBB and SPDP. There should be no different if Bidayuh do not join any non-BN party because the consequences is always the same from one term to another. It is obvious that we are marginalized in politic, economic and culture. There is nothing Bidayuh BN leaders can do even in the state level. Only listen to the master and follow 100% without figuring the pro and cons. In my last posting on the Bidayuh Leaders Fear - Master First, it was stated that this is a great fear to Bidayuh and now you see that is is a great fear for these three men. Have Taib and Mawan do not aware of Bidayuh support to BN since many years? Did we vote for oppositions and the victory is for Barisan Nasional?

We never realize that we are sidelined by the Barisan Nasional. Not today but since the era of SNAP and SUPP. I do not know why we are still sleeping and dreaming of the beauty of the heaven and doing nothing to make it real. Again I say, this is not anti-government message but we have been sidelined by the Barisan Nasional. Forever we will be sidelined politically, economically and socially.

Datuk Seri Sulaiman Abdul Rahman Taib is the first day candidate but now the deputy minister of the Minister of Tourism. From a family business (CMSB) CEO to a deputy minister and maybe the next CM. Who knows? It does not take him a year to be in such level but it takes centuries for Bidayuh which has been enslaved by Barisan Nasional (PBB) to be the State minister (not assistant). It is not the way it should be and we deserve to be heard and not to be ignored. Our support (votes) are not worthy at all to them as we can feel the discrimination by the Barisan Nasional. Our leaders are enslaved and our provinces have no different compared to Mozambique or Mandalay in Burma.

This is another lesson after Mutiara and before Kampung Tun Razak. Not only that but the dismissal of Patau Rubis from the State Ministry few years back. Just one after another disaster but we keep on building our hut in a raging storm hoping that the hut will remain. The STAR is now completely forgotten as the era of Patau Rubis has been slowly dimmed by the Bidayuh themselves and joining the elephant parties just for a plate of plain rice. And our dignity is equal to the the dog feed, plain rice with plain water. That is the price of the support for BN since many years.

I do not know how do Dawos, Riot and Tiki feel on this matter but I think there is a desire deep inside their heart to be at least DM of in any Ministry. Manyin is right when he stated that Bidayuh must work hard because we are not the part of the government just because we are minority. Two years is not too far to think about Bidayuh future under the Barisan Nasional. Make it enough for now as we are sidelined though we are not minority compare to Melanau and Lunbawang.