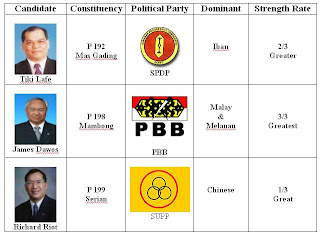 Please click the image to enlarge
It took me 1 hour to search for good pictures and edit them all. Nevertheless, here is the outcome. After much study on their profile and their political profile, there are some ideas coming out from my mind. But before that, when I type Richard Riot in the google search bar I found other things else. You try and see what you will get. Some group of people holding fliers and banners and some with molotov cocktail and you get the scenario (just a joke and no personal attack to Richard Riot. :).

From these three BN candidates profile there are several issues that are playing in my mind.

A. Philosophy of Bidayuh Betterment.

Came from the Iban dominant party is another ignorant attitude to develop the society. PRS has the dispute and is well-known that forever the Iban are never in unity. The causes are not so complicated to comprehend. They never learn to live together in a peaceful manner. Drink too much and even shot their relative to death.

Though they are the majority yet they split by their self-interest attitude. He should learn on the Leo Moggie case and Tajem Vs Masing lightweight boxing championship. The Star Press quoted " The 21-year-old Parti Bansa Dayak Sarawak (PBDS) is embroiled in a leadership struggle with state Minister of Social Development and Urbanisation Datuk Seri Dr James Jemut Masing heading one faction and party deputy president Datuk Seri Daniel Tajem leading the other".

The "take for granted" attitude is always wrong for there is something need to pay back from the constituency. Once again, ignorant and self interest issue. Maybe to save the gold mine from SUPP? Well, if that is good for your constituency, open it to the people to reap what they are looking for. Since many years, Bau district is still the same. Let see if Patau can do something there if he win this election.

II. James Dawos
He is from PBB and the strongest bumiputera party in Sarawak. He is a state minister (I do not care what kind of portfolio). Making Malay and Melanau as the reference of self development or philosophy is not wrong as long as Bidayuh is well taken care. Most of them are Biatah, Bisitang, Bianah, Braang and Tebiya. But why we are considered lowest-class bidayuh society. Highest poverty rate especially those who live nearer to the border. Even less of them get the "Brutal Poverty Scheme" from the government.

Built his mansion in his village showing that his social status is more better than his villagers. As the payment of his royalty to Malay and Melanau, he has been given the title "Dato" and secured the CEO position at Trieneken. As the state environment adviser, he is more busy with his own job rather than going back to his constituency to listen to the people's problems.

This pro-Chinese must be a rich man. Under the order of the Great Emperor DCM George Chan, there is nothing much he can do for Serian. Chinese is too calculative and "kai-su". That is the natural being of the Chinese. It is not to say that they are very stingy but it is hard to receive more from them.

If they give you a pot of rice, they will ask back for two pots. That is called investment. In economic study, the investment must produce profit. In financial study, interest means hidden charges from the services provider or so called "duit cekik darah".

Though Serian has been given th "City" title, to me it does not bring any meaning to Bibukar and Bisadung. The shop lots are not theirs. Maybe they (Bibukar & Bisadung) are naive of commerce and trading. But there are plenty bidayuh business graduates from Serian. My wife studied e-commerce and international business and working with a bidayuh small enterprise. Thank you to the boss for the job opportunity.

Who own Serian resources? Bidayuh? I would like to say that it is non-halal hub where there are many pig farms along the Kuching- Serian Road. Chinese get the money and Bidayuh get the worst breath air.

“I am servicing my kawasan every weekend. You can imagine how challenging it is as we have 180 villages under this constituency. But we the wakil rakyat from here are working as a team,” he said referring to State Assemblyman for Tebedu and Minister of Environment and Public Health Datuk Michael Manyin Jawong and State Assemblyman for Kedup Frederick Bayoi Manggie, both of PBB.

Turun padang is better than turun harga. Let say there are 300 supporters in a village. So 300 multiply by 180 equal to 54000 supporters and he will secured his post again for another term.

B. Bidayuh Unity under one Political Party.

If I get a chance to interview all three of them, there will be more to write down over here. Somehow based on my opinion, there are several common reasons why we are still spliting:

1. Bidayuh has different view of the others. It is hard to unite bidayuh since they are separated by language and customs.

Well, there are many type of malay, southern region speak different and the northern region speak even funny too. Air and Ayak (water) is much different in term of pronounciation. So to Umo' & Piin and cannot accept each other as water and this is more funnier. Hence, Salako pronoun water as Sungei and its sound is the funniest among those two.

2. If we are under one party, we are the minority.

The story Sikadut and Sikumut of Siburan tall three remind me of one thing. UNITY. The younger brother need his elder brother's help to cut down the three. It fell down until Indonesia and bring up to head hunter tragedy. Based on my father story, the three is very high and the two brothers have to dance under it to make it shorter.

There is no point to join this and that party but yet we remain minority. Our ignorance is the disadvantage to us and therefore the others take an advantage due to our stupidity. Our right has been colonized by the other and they influenced us to turn our back from our people. We tend to look at the other as greater than us and we tend to think that we are too small to ask for what we need. The first Chinese immigrant was in Sibu and during that time our ancestor from Kalimantan and they are the only land owner.

If DBNA is for good, why don't we use it as a medium to promote our humbleness to be united as a strong bidayuh? If Bidayuh unity is not the common agenda, then we should get rid of DBNA and open it for rooster fighting club or big bikers club. There must be more fund to collect and fun to gain.

Finally, the bidayuh leaders should not put their people in such dilemma. We have lost so much from your stupidity and self-interest motivation. What if we sell you one vote for RM 1K or else we vote for opposition? What will you do? The oppositions have no money but voters never sell their vote because it is the matter of trust and hope.

"Peace will not come out of a clash of arms but out of justice lived
and done by unarmed nations in the face of odds.

Democracy and violence can ill go together.
Evolution of democracy is not possible if we are not prepared to hear the other side.

Power is of two kinds. One is obtained by the fear of punishment and the
other by acts of love. Power based on love is a thousand times more
effective and permanent then the one derived from fear of punishment.

I just scanned through your blog the other day and saw a "comparison table" between Dawos & Majen. Now where is it?