The Three Magi's or The Three Bandits 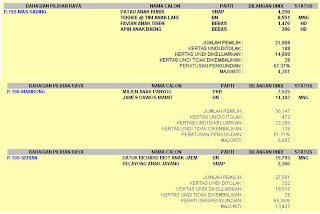 On the night when Jesus Christ was born in Bethlehem, the angel spoke to three magi's that are on the way to Bethlehem, sent by King Harold. The angel told them not to return to the king after they visited baby Jesus, Mary and Joseph. They presented gold, silver and myrr to Jesus as the offering of thanksgiving. Then they made a way to no where but definitely not to King Herod. After a moment of wait the magi's did not return and the King was so angry. King Herold then commanded his government to kill all the baby boy within 2 years old and below in the city of Judea. The city of Judea was full with laments and cries for the lost of their male babies. Then Joseph took his wife and child to Nazareth and live until Jesus is ready for His ministry. (Refer to the Book of Matthew Chapter 1-2 for more details).

Before Christmas, I always hear my father sing this song " Kieh 3 naan raja. Man tubi matup mata" which mean " We are the three kings, eating uncooked rice". I did not hear his song anymore after he has depart for almost 10 years. The song is referring to the three loyal magi's to the Lord. It keeps on remaining me to be royal to the one whom able to bring me hope and assurance of my future. Though I have to face the risk of many unpredicted things, I must be who I am all the time. There is no satisfaction in any kind of a forced royalty though you are fed with prosperity and yet you are living in fear and uncomfortable.

In every Hong Kong movie, the gangsters are the richest society where they have no worried of money and shortages. They are free to have parties, beautiful cars, big house and so forth. These group of people are never life in peace because of fears. Fears of their opponents or competitors and the law enforcers.

Yesterday victory over oppositions and independents, in 3 Bidayuh constituencies was a great moment to celebrate. The people has proved their royalty by giving their full hope and inspiration for Barisan Nasional to rule again. My very congratulation for Tiki, Dawos and Riot. You have made it true for every term of your service and we are much better now. Perhaps...

The mandate that has been given yesterday must be uphold to the very top of the trust edge. We prepared the way to them to get rich and to help us to restore our right and dignity as the Malaysian citizen under the Federal Constitution. Win means there must be no one- man action but to work together with the DBNA and BGA committee to reduce the misunderstanding on the current administration. Talk to the JKK to know what is going on in the villages and so much more which they know better than I am.

What are the hope for tomorrow as there will be one more term for three of them to represen us in the house of parliament? Is it going to be the name again as per my previous posting regarding on the "You tak suka, you keluar Malaysia"? Or will the history be the reference of reformation and the stepping stone to change? There are up to them to be our ear and mouth in the parliament once the new government is formed next week.

On the Tun Razak issue, it is quiet controversial. As per Malay people always said "Ditelan mati mak diluah mati bapa". In fact, this is the most sensitive and controversial development proposed by the Barisan Nasional for Bidayuh. They are many issue on Tun Razak which is beneficial for only one party.

1. As the economic expert, Minos and his buddy,Tiki offer Bau for timber and quarry which will bring millions of profit. This will be used to recover lost in the previous business failure. Who benefited more? The Rejoi will get RM 10K-20K per family and they get millions. Patau Rubis has defended the Tasik Bitu gold mine which was asked by Anwar before because it belong to the Bidayuh or specifically Bi Bau.

2. The proposed dam project will not benefit the Bidayuh because it is not given to Bidayuh contractors or the Sarawak bumi allied contractors. Who will earn more? Daim? Bidayuh?

3. Who get the benefit for supporting NEP and Malay policies? Bidayuh? Yes. Only the politicians. There for Tun Razak is resurrected and seat at the left side of Bidayuh leaders.

4. The marginalization of the bidayuh even worst compare to the Indian as the 2nd class society. Why? We have the representative and we gave them the mandate and it was our fulfilled obligation to Barisan Nasional.

5. If the promise of Security, Peace and Prosperity will be fulfilled in such a equal and justice way, will Bidayuh welfare going to be listed in the agenda?

There might be more question to ask but since we have only 3 representative and considered minority, then it is good to keep silent and let the rakyat barking because thief always working in silent though there are many dog barking at them. Those who are awake will wake up to have a look and those who are tired and sleepy will remain sleeping.
Posted by Unknown at 11:48 AM