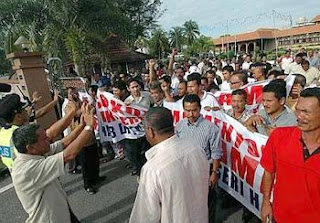 UNMO members have forgotten the second Rukun Negara “ Kesetiaan Kepada Raja dan Negara” or Loyalty to The King and The Country. The “riot” by the Idris Jusoh supporters showed that the UMNO fellows have neglect the secrecy and the authority of the Rukun Negara. According to the “adat perpatih”, ancient laws, those disloyal citizens must be put into beheading punishment.

The true color of the UMNO as the Barisan Nasional father is shown today as gathering should be forbidden. It remained me to the story of “Raja Bersiung” where the people have to kill him due to his brutality. He is said to be a vampire.

After the Tsunami struck peninsular on , the Monsoon Cup now has to be hosted again without Dato Idris Jusoh on the jetty. As Lim Kit Siang was called stupid DAP by the UMNO he has to admit his mistake and made an open apology to the Malaysian. The DAP has cancel their boycott and attended the sworn ceremony in the Istana Perak.

Now Terengganu will host their Monsoon Medal by the governance of Dato Ahmad Said. Who is this Ahmad Said? The rejected UMNO member. What are the reasons that UMNO have to say on Dato Ahmad Said rejected membership? Who should we listen to? The Sultan or the PM?

Why that Dato Idris Jusoh is become so much important to the PM. Kemaman Oil and Gas or Rantau Abang Turtle Rehabilitation? Only UMNO knows the right answer as The King has appointed Dato Ahmad Said to be the MB.

Prime Minister asked Ahmad in a nice manner to leave as he should not be at the meeting (for defying Abdullah's instruction to support Jertih assemblyman Datuk Seri Idris Jusoh as Mentri Besar),” he said.

The assemblyman said Ahmad had no choice but to leave.

The assemblyman also said those who attended the meeting were uncomfortable with the presence of Ahmad.

“He went against the instruction of our leadership and he has to face the consequence, that is appropriate,” he said. The Star Press

UMNO has lost its integrity and loyalty to the Sultan. The concept of Islam Hadari in Terengganu is now getting more confusing and doubtful as the disloyal act has been projected to the public. The best is to sit down and see if the bronze Monsoon Medal going to be contested for the first time in Terengganu.