1. When I was a young boy, I fear of big man, dog and deep water. I will hide and keep quiet  if there some big man across. I would divert my pathway if there is a dog in front. I would take shower at home rather than following my friend to go to waterfall and swim.

2. When I become older and older, I am no more fear of those three major fears in my life. I start to be good with dogs, dive into 30ft deep water. I am no more scare of big fat man (Goliath).It has gone with time and my age.

3. Many of the Bidayuh fear of many things. Some fear of bad spirit and still practice polytheistic, paganism and other superstitious. Long time ago, the whole village will curfew during "head hunter season" and children are accompany by their parent on the way to boarding school. We used to fear of owl because it brings bad sign to the village.

4. In this new era with strong religion belief and practices, the Bidayuh are free from all those fears. There is no more head hunting in the village. The owl is just a night bird and not to scare of.

5. Nevertheless, there are great fear that the Bidayuh could not fight. They rather silent themselves to keep save. They fear of marginalization, suppression and negation.

6. The second class fear of daily survival challenge; merely forget the main purpose for the next generation. Less could work hard and safe money for their children education; at least to the local university. They prefer ignore and escape from the greatest burden for whole life change. Education is the only answer of poverty, marginalization, ignorance and deprivation. Some have lost hope and motivation and only provide a moderate education; until SPM or STPM.

7. The youngsters blind themselves from brighter future. They are dis-motivated, lazy and some are rebellious. In every village, there a pack of youngsters sitting on motorbike at the roadside. Some enjoining themselves with a bottle of "langkau" (rice liqueur) and get back home for long sleep until the afternoon. By the time their parent are working hard at the paddy fields, construction sites and estates, they are still sleeping and waiting for unprepared lunch at home. Some hanging on the "holo" table hoping for victory to  buy a bottle of liqueur and cigarette. They rather hide form the real world and be the same typical kampung boy.

8. The elites, survive by their current position in politic, business and social relationship. They are live by abundant and comfortable living. Some are politicians, business person and professionals. The greatest politicians are those who could secure themselves in the greatest political party. They are untouchable, powerful and rich. Certain time, they look back at the village and observe those who toil until the last drop of sweat. The the election time comes, the politicians will give more paddy fertilizer hoping that the paddy production will increase.

10. The association is now close its membership to the typical Bidayuh. They only interested in elite group who could donate more money and could afford for the annual fee. It seems the association has stop giving study aid to poor students. The new building has completed but empty. The Bidayuh could not pack the meeting hall because someone might ask for study aid and the association will close down due to lack of fund. To make it survive, the association is kept among the elites to perverse the interest of its members and reputation.
Posted by Unknown at 10:14 AM No comments: 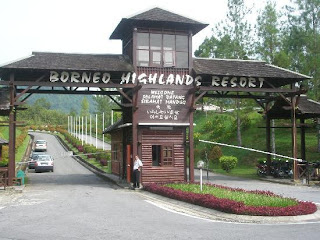 It’s More Than an Abandoned House. 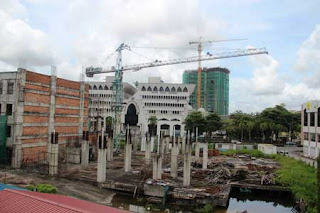 1. Rumah Dayak was located at Jalan Satok as a greatest symbol of Dayak unity long time ago.

2. Somehow, the old building was demolished and new construction started in 1997 hoping that the new building will brings hopes and inspirations to the united Dayak.

4. As everybody is pointing fingers to each other (SNDU as Client with developer to be unknown) the project could not continue and the Rumah Dayak is still a bad image of engineering’s picture in the heart of Kuching town. There is no news on the Rumah Dayak fate as it seems to be the hardest mega construction after Bakun Hydroelectric Dam and KLCC towers. Maybe the soiled beneath is not stable or there is no solid and strong steel can erect every level of the building.

5. I could not understand why Rumah Dayak project could not complete. There are great engineers and architect that can build great buildings. There are financial institutions that can provide loan for the project. What is so hard to build Rumah Dayak?

6. This could be the problem with the Dayak themselves. They could not work as a community to look after their own problem. I think it is not about the engineering difficulties that make the project halted. And not because of building material for sure.

7. Unity among the Dayak is a taboo among themselves. They quiet don’t know what the best is for the community. They are scattered away by their own ego and stupidity. Everybody is looking for better ground to live and let the others survive the quicksand.

8. Dayak once united and exited by SNAP and PBDS but both dead immature. UMNO and BN scared by the Dayak spirit and let them scattered away and ruled by their associates. BN managed to tame the loincloths hero by offering them Levi’s Strauss jeans pants. Federal associate managed to starve the hero and take the shield and give him umbrella to protect him from enemy and not save him from starvation.

9. And so it happened to Rumah Dayak, as not even a Dayak YB could look into this matter as a shame to the Dayak and initiate something to restore the dignity that standing still in rust. That is the reality of the Dayak identity; a rusty rods. Every Dayak could not look at Rumah Dayak as their failure. As the blame game is still in a row, the Dayak have missed their opportunity to be the best in Sarawak through SNDU by completing the abandoned house.

10. We could not blame it on the politicians as Rumah Dayak is not their aspiration but inspiration for all. Dayak should be independent as they are the most clan in Sarawak. While the Foochows is building their Foochow Association in each district, Rumah Dayak is still dispute on who should complete the task. When the other are progressing, the Dayak is still waiting for miracle by drinking rice wine with grilled pighead.

11. A loincloth is still a loincloth as it is an identity. But we cannot use it in the office today because it is not proper in front of female workers. We still can use it at longhouse if we love it. If the Dayak could not afford for bricks and steel, let the Rumah Dayak be build with the Barkcloth, bamboo and hardwoods.

12. They should forget of beheading their friend’s head but make friend with the world and change. The Dayak must ashamed of their past and build the new hope for the community so that people know that the Dayak are not timid but wise, educated and independent community.

13. After all, what changed them is not their surrounding and nature but their effort to change the whole world. Some fallen and some hanging on the life line. They will never realize until they fall into the dark valley as some of them already did.
Posted by Unknown at 4:10 PM No comments:

1. When Sarawak has agreed to “join” Federation of Malaysia in 1963 together with Singapore and Sabah, it was a better hope for the Sarawakian.

2. After the WWII, British was burdened by it colonies and releasing each one after another comprising of it colony in African Continent and Asia. Malaya was released in 1957 when the queen has agreed for Malaya independent.

3. Somehow, Sarawak and Sabah is still under colony together with Singapore. Both Sabah and Sarawak (Borneo) were still struggle with Communist insurgency as the communist ideology was spreading greatly to the South East Asia.  Winston Churchil was very worry and could not afford to lose the British Colonies into communist. Therefore, he thought that Sabah and Sarawak must be free from communism before it granted with independent.

4. During that time, Sabah was claimed by Philippine and Sarawak was on the spot of Sukarno, the Indonesian communist. Indonesia declared confrontation to the federation of Malaysia in 1962-1966. Then Sarawak needs an army in order to be saved. That is why Sarawak needs to join the Federation in September 16, 1963.

5. Nevertheless, there are ups and downs during this long period of “partnership” with the Malaya. The two lands are divided by South China Sea and people hardly meet to talk and discuss the issue of the State.

6. Malaya believes in special right and supremacy of the Malay in peninsular. Then, the laws were made to protect the Malay and “bumiputera” was focusing on Malay in peninsular and keeps aside the needs and right of the bumiputera in Sabah in Sarawak. As Lee Kuan Yew (former PM of Singapore) truly believe in equality for all and liberalism, Singapore was expelled from Federation in 1965 when the small island is struggling with worst racial riot and clash.

7. Sarawak and Sabah remained in the Federation as the state needs protection and better government. Somehow, the Malaya needs to tighten it “partnership” by planting Malay idealism to Sabah and Sarawak. Sabah was so fragile when UMNO was step in and after the 6 June 1976 tragedy that killed Donald Stephen and other ministers at Sembulan air crash.

8. While Sarawak resisted UMNO, there are terms and conditions that allow Malay idealism to be incurred. The Dayak must be governed by the Malay. There are several occasions that lead to the downfall of the Dayak under the Malaya plan. First was the vote of no confident to the Dayak CM, Stephen Kalong Ningkan by Taib and the Malay which was granted by Tunku Abdul Rahman. Two, the de-registration of PBDS and Ming Court affair that gave advantages to Taib and his companion in Malaya (Mahathir). Now, PBB was under the Malay dominance although the Melanau Malay is the minority in the State.

9. However, there is no way to escape from the painful federation as the people are weakened by greed, money and titles. Even the most powerful Dayak can be bought for RM 50,000.00. Why should they thing of the people when there are government to take care of the Dayak?

10. The lost is not at the politicians who believe in corrupted government but at the side of the people who work and support the government policies. The people pay taxes but have faces inflation and the government is ignoring it.  Who to blame? Since our ancestor has agreed to Lord Cobbold, then we should endure to hardship and bitterness.
Posted by Unknown at 6:29 PM No comments: