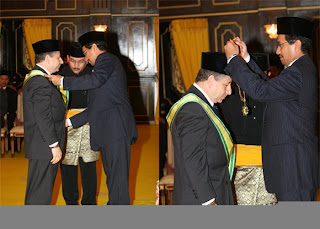 The ceremonial dress (Songkok) is compulsory for the non-Malays when attending the investiture ceremony. It became a sensitive issue especially for the Chinese as they preserve their dignity and wearing a songkok is an insulting act. That is why in any royals' birthday the non-Malay guests are required to wear songkok in the Palace. The headgear must be wear during the high title award ceremony.

There is no harm to wear songkok in such royal ceremonies as it is required by them (Sultans). My brother-in-law asked one of the registration officers in Kolej Chermai Jaya if I have to wear songkok to lecture hall. The officer smiled to him and said it is not a requirement. That was in year 2000. I asked my brother why did he asked such question and he told me that he need to know since it is my first time to mix with Malays and Muslims.

Some people (non-Malays) think that wearing a songkok is an insult therefore they seldom attend the royal parties or reject their awards from the Sultan. Maybe this is not a way it should be and in certain point, sometimes it is a sensitive (taboo) issue to talk about. In Malaysia today blog, some of the visitor expressing the issue of asking the non-Malays to wear songkok is as the same as asking the Malay to eat pork or asking the Malay to eat in one table with those who eat pork. Too sensitive but yet some may think that it is just a small matter as long as they (non-Malays) are not required to leave their faith and culture in order to receive their titles by wearing songkok. Up to you to judge then.

To me the songkok issue is not permanent issue for Bidayuh. In facts, I see many bidayuh ladies wearing baju kurung to school. Those bidayuh ladies with tudung are muslim lah. It is not a sensitive issue because they are muslim bidayuh. To wear songkok is ok compare to give a name of Tun Abdul Razak to the new settlement and most of the voters in this blog reject the name. Maybe Manyin has nothing to concern about because he used to wear songkok to any royal function but the new settlement should not be the abolishment to the bidayuh dignity. His first deal of Bandar Mutiara instead of Tebedu must be known to us as the first silly mistake made by our "trustee".

I am glad that the completed 4 lanes road from 13th mile to Serian is not to be renamed with Tun Mahathir though he (Mahathir) is better than Tun Razak. I do not see any kingdom of Tun Mahathir though he is the man of the Malaysian matches. Maybe because he is originated from Indian-Malay blood. Even the Perdana Leadership Foundation is a place for him to breathe his last breath where most of the new leaders are required to learn from Barisan Nasional rather than 20 years man of expert and wisdom. That is why we can see the great Khairy and Hishamuddin and Nazri in the government.

The issue with the new settlement is another "give away" by our leaders to prove their (not our) support to Barisan Nasional. I do not see any benefit of using such a name just to gain development fund from the federal government. I do not see any changes in Kampung Darul Iman (previously called Kampung Kawak) though it is a Bidayuh Muslim village and same to Kampung Rayang (I have not heard any new name of this kampung). What I can see is just a piece of oil palm estate where the slaves toiling their "give away" estate. It has no different to Kampung Tun Razak too? It will be even worst because Tun Razak is a Muslim and those in the kampung are non-Muslims. So the fund will never be for the non-Muslim Razak because it is an insult to the Malays and Muslims. Therefore, if Tun Razak is a muslim, so there will be no tolerance for non-Muslim to non-Muslim Tun Razak (Bidayuh) to get an adequate development fund. Remember that NEP is not at our side though we are Tun Razak because we are non-Muslim Tun Razak.

The rejection of Tun Abdul Razak name for Bidayuh is not an anti-government sentiment but to claim the freedom of culture as per stated in Federal Constitution. Therefore, it is an insult for Bidayuh village to be named with Tun Abdul Razak. It is ok to wear songkok for few hours in a function but to adopt such name will be a permanent shame for Bidayuh.
Posted by Unknown at 10:05 PM