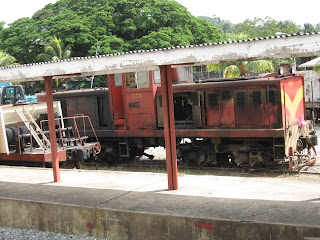 I has been told by one of the man in Beaufort that the train from Beaufort to Tenom has been stopped due to the bad condition of the locomotive. As I drove along Papar - Kota Kinabalu road, I saw the new railway construction progress doing KTMB (Keretapi Tanah Melayu Berhad). The train service from Tanjung Aru to Beaufort is now stopped for construction and upgrading works.

The railway has been built by the British North Borneo Company in 1880's. Then after the independent, it was managed by the State government until today.

If you travel from Beaufort to Tenom, it takes you 3 hours with the speed of 20-30KmH. That is the wold slowest train. I met one of the teacher who is working in Pangi Primary School and have a chat. He told me that he will only go to Tenom once a week to get diesel for the school's generator and foods for the boarding school. There are less than 10 teacher allocated for Pangi. There are only two trip form Beaufort to Tenom and once from Beaufort to Tanjung Aru.

The new railway and train by the KTMB will be more effective on term of time barrier and speed. Hope that KTMB will be the answer for the Sabahan to travel from those area. The RM334.8Mil should be enough to cater the transportation needs for the Sabahan.