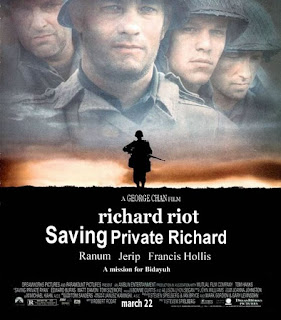 The master of puppet (Richard Riot) is now being worshiped and summoned by the Serian SUPP members as the month of ghost worship (bulan hantu) is coming again. The congregations are offering food and hell money to the master of puppet and hoping that the spirit will accept their offer after the spirit raged and caused heavy storm in Serian. SUPP has no different with the beggar on the street. They are wise beggar as what we have seen in the Hong Kong Kung Fu movie.

What has SUPP done for the Bidayuh since Riot, Jerip and Ranum were "puppetized" by them? Has SUPP put Bidayuh at the second list of the party's agenda? Jerip hopped from poor STAR and join SUPP because of his short sighted mentality toward Bidayuh future in the State. Be it Jerip or Ranum and Riot. They are nothing to do with the Bidayuh agenda at all. I know that money politic has been practiced among the Bidayuh leaders. We cannot prove it but it is obvious since we are not given equal opportunities as other races have had. Our right and dignity have been sold by those who are greed of power and money.

What is the different if Riot withdraws his resignation from SUPP? He will be the first Secretary of Parliament? Is SUPP still relevant for the Bidayuh in Serian, Padawan and BAU? All this while we have been marginalized by SUPP and PBB due to our stupidity and ignorance. Riot supporters must not take any non-monetary advice from SUPP. If you ask what is SUPP vision for the Bidayuh, they will tell you that these 3 men are hopeless and never know what the best for their people.

SUPP is now telling lies to the Serian people as they will end up with big lost on the next State Election. Let make SUPP like MCA and GERAKAN. They have given us enough diarrhea since centuries and they now irrelevant to Bidayuh agenda. Ranum was going down to Serian as another mo**n Bidayuh to be a patriot for SUPP but the fact is that he is just another Bidayuh street hawker. What changes he has made for Bidayuh in Bau specifically? Tiki saved the Chinese independent schools in Bau and at last he lost his position in the parliament. Oh my God!!! He never realized that he is being used! Look at the rural Bidayuh Schools! Full with scabies and stupid students but nobody cares. The more SUPP the more stupid Bidayuh we have because we are learned to be stupid and timid.

SERIAN: The Sarawak United People’s Party (SUPP) has quashed rumour that Serian Member of Parliament Datuk Richard Riot anak Jaem has resigned from the party.
SUPP Information Secretary, Datuk Alfred Yap told a packed press conference in SUPP Serian office here yesterday that Party President, Datuk Patinggi Tan Sri Dr George Chan had spoken to Richard over the phone yesterday.
“Richard Riot felt upset over the rumour as reported in the newspapers. He wished to clarify and state catergorically that he is loyal to Barisan Nasional and fully supports the leadership of Datuk Seri Abdullah Ahmad Badawi, Prime Minister of Malaysia,” said Yap.
Yap urged party members and supporters to listen to the advice of party president and to remain calm and not to listen to rumour and to stand behind Barisan Nasional (BN) Government under the leadership of Abdullah.
When asked why Riot did not make a personal appearance to clarify the rumour, Yap said Riot was now on leave after working very hard during the campaign.
Richard had won with a majority of 13,427 votes in the just concluded 12th general election and the statement stated that he would continue to serve as a MP for Serian and would continue to bring development to the area.
When asked to explain why Riot was not present at the press conference, Yap said the party had made arrangement for Riot to meet the Prime Minister and to explain and clarify the rumour.
He denied that SUPP has received any resignation letter from Richard and said, “I will try to contact him.”
Yap also denied that SUPP had marginalised the Dayak community and said after each election, Richard’s name was put forward for consideration to be included in the administration.
Yap said Riot had joined SUPP in 1995, and his name was always put up to be included in the cabinet.
“However, it was the prerogative of the Prime Minister to decide whom he will include in his cabinet line-up,” he said.
When asked whether Riot had ever requested for any post in the government, Yap said he and his supporters did so but was not chosen.
Nevertheless, Riot had been made the Chairman of the Sarawak Rivers Board and currently, he is the Chairman of the Pepper Marketing Board.
Meanwhile, Opar State Assemblyman and SUPP Central Working Commitee (CWC) member, Ranum Mina advised Richard’s supporters not to be emotional as the BN Government will not marginalise any race.
According to him, the Dayak members in SUPP had always requested from the party leaders to appoint some of the Dayak members to some posts such as senator and political secretary to the chief minister, but was informed that currently, there was no available vacancy.
“We have to adopt the attitude of give and take. We should try not to be too emotional but instead to work together with other races to create a more harmonious society,” he added.
Among those present were the Assistant Minister of Land Development and SUPP Deputy Secretary General II, Francis Harden and the Political Secretary to the Chief Minister, Pang Dah Nan.

I like your Saving Private Richard version. Well done.

All Malaysians especially Bidayuhs are entitled to a fair go. I left Malaysia because of the dirty politics and I haven't looked back since. If you are a graduate or have skills (welding, hairdressing, chef), think about your future in a first world country like Australia. Send a brief CV and your details to me at "grg.grgs@gmail.com " for a free assessment today.

Unfortunately the Dayak leaders have played out their own people. They can't even assert themselves in the political scene, let alone help their own people. Time to consider an alternative alliance, one that doesn't seek to enrich the leaders.

Re: george's comment
Selfish, unpatriotic people like George will choose to leave the country while the rest of us with skills or without skills stand side by side to clean up the dirty politics in Malaysia for the future generations.
If you're selfish like George and only think of your own personal gain, please send your CV to grg.grgs@gmail.com for a free assessment today. I prefer to stay in Malaysia to clean this mess up even if it takes my whole lifetime.

Selfish, unpatriotic people like George will choose to leave the country while the rest of us with skills or without skills stand side by side to clean up the dirty politics in Malaysia for the future generations.
If you're selfish like George and only think of your own personal gain, please send your CV to grg.grgs@gmail.com for a free assessment today. I prefer to stay in Malaysia to clean this mess up even if it takes my whole lifetime.
**************************************

Sound good bro! What kind of job should a Malaysian like me to be in?

I like your Saving Private Richard version. Well done.

I too love that version of Saving Private Richard version. Why nobody is doing something to kick his ass out? Do something people for God's sake.A couple of greedy and selfish people & that's my honest opinion.

The time will come when ass need to be kicked.