Marat is the one who used death penalty to those who opposed revolution in France 1780s. Marat was made as god to those revolts and that was how Republic of France after King Louis XVI is beheaded with guillotine. The monarchy families were sentenced to death including those who are pro monarchy and even the palace guards. National Essambly was made in 1789 as the turning point of democracy in France at that time.

Revolution has begun when there were mass of poverty, inflation and the failure of the king and the government to rule and run the country. Then there were a lot of demands to replace the monarchy system which benefited the land owners as France were a feudal country at that time. Even those who cannot read marched on the street and shout out revolution and changes. Somehow, National Assembly just could not stop the terror of revolution where blood is shed on the street. Church has lost it power when terror reigns. If you read France Revolution you might be amaze and aware of what should be done.

Actually, King Louis XVI was aware of what was happening to the people but somehow, the spirit of the people just cannot be controlled as the terror is crawling all over the street of Paris. King Louis has forgotten his feudal system and he never control the palace. For more information, you can read The France Revolution.

Now, The Bidayuh is still living under feudal system where they are living based on their status. The lowest class people are always made fooled by those so called “elites”. We lost a lot and yet we gain nothing from the government. Compare to the other tribes, the Bidayuh is the poorest among those all. We have plenty of MP’s who should monitor the issue of the Bidayuh but they are made dumb by the party leader that they join. George Chan made Jerrip and Riot as land brokers to be awarded to some Chinese people at Bengoh and Serian. The Chinese get the land title but the nearby Bidayuh are squatters. I am not racist but it is the truth. Dawos should has better thing for the Bidayuh but we get the worst. Dump site project and plenty of quarry and unnecessary projects which benefited Parti Bumiputera or best to say to Naim Candera, Titanium and other Taib’s business.

Should we get up and start revolution? No, nobody should do that or even think of it. Dangerous to the kids. Well, let me explain here. We have been living under the BN umbrella for years but yet we are still living under hardcore poverty. The Bidayuh should get better from the government such as land title. Forget about the NCR law as it should be amended. NCR law is to benefit the politicians and not the origins. We should learn from the history and not by the land scammers and two faced politicians.
Posted by Unknown at 12:11 PM 1 comment:

Kampung Kiding is a part of Padawan area and it takes you almost two hours to climb up Manung hill to get on the mountain top. The people are very friendly and heartfelt and you will never get hungry when you visit that village. I have many friends and ex-classmates from Kiding and one of them is my very close friend. 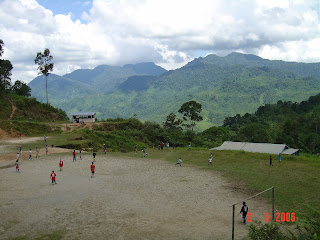 Mountain top Football Game, by TabunSiya
When I was in SMK Padawan in 1994 to 1997 I made friend with them. The best about Kiding people is that they are very hardworking and intelligent. In fact, a lot of them achieved flying color in public examination. Some of them are now working professionals, teachers, bankers, engineers, architect and scholars. I used to mingle with them as they are very different in term of character and behavior. They are not rude and very kind.

Kampung Kiding has a very powerful man. He used to be very powerful but now he is a “Legend”. William Tanyuh was made as Bengoh’s MP in 1990s. I could not remember the exact term as I was still a young boy at that time. Since that time, Kiding is still undeveloped even though William Tanyuh is the MP and he comes from that Kampung? Why? SUPP must have something better to say on this issue. After William, then came Mr. Khoon Seng, where nothing much to see at that time. The villagers still enjoy the 2 legs drive up to the mountain. Student walked on foot to boarding school and mothers and child have to walk for 3 to 4 hours in the jungle to get to Klinik Padawan. Wow, we voted for change and yet the change has never come even never came across our dream.

Rhythm of The Lost Tribe

Why William neglect Kiding andf Padawan? I also have nothing to say as he is with SUPP and therefore, SUPP is always a bowl of soup without any piece of bone, meat or even salt. Just a plain soup. During his campaign, William during that time, Tanyuh always telling the villagers that government is bankrupt and therefore, there is hard to get road to Kiding, Sapit, Sadir and Semuti. SUPP must be crazy indeed. Tapah and Siburan is a Chinese area under SUPP and these two are developing well. What came in my mind is that SUPP put us in struggle and at the same time trade will only happened in Tapah and Siburan. If you were in 1990’s, you will see people from Padawan trading at Tapah. I used to sell black pepper to a fat “taukeh” and after minus the fare I get less money to buy stationeries.

Now, if you go to Padawan, Sapit, Kiding and Simuti, there is nothing much different. The only different is that Padawan is spit into two. Bengoh and Tarat are the two bandit in the kampung and both are taken care by three stooges, Dawos, Sagah and Jerip. The three Bidayuhs that never feel as Bidayuh or I am just talking rubbish here. And now we are going to lost 4 villages to make way for Bengoh Dam Project. The new identity will be given to them and it is called “The Razak Clan” by Manyin. Good the be a lost tribe again.

Indeed, politics is nothing much to the Bidayuh actually. As long as there is government and political party the whole world will be in a good shape and therefore, there is nothing to worry about. The Bidayuh must follow the government order including burning their house for plantation and stupid projects. Yes, Bidayuh must obey and agree because their MP said so. They have never learned from their mistake and yet repeat the same mistake over and over. They have their so called “Independent” organization but still begging from Razak and never get support form the members. Corrupters stay with the corrupters and there is no place to get back to the origin place.

We will still carry the burden under government policy one Malaysia one Identity by Razak. Although we are the land owner, we never get the land because government is greater than the people. Yes the people are stupid and the government is brilliant. Next time, let us vote for brilliant government so that we will remain stupid, isolated and always be the lost tribe.
Posted by Unknown at 9:24 AM 4 comments: