Loyalty by Sacrifice and Pain. 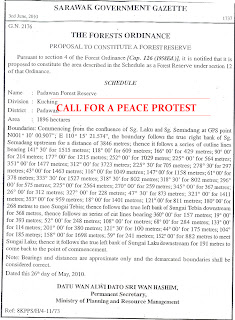 We have to vote Barisan Nasional because they care for us since the beginning of the Federation. They have their best track record in developing the country with vast development and achievement. We never receive anything from oppositions and that shows us the oppositions have no money to develop the nation. Have they build the roads, schools, clinics and bus stops? No. They never do.

I try my best to be independent in my writing and keep nobody in the line of criticism and soft accusation. That is my aim to be an independent writer. But then, with so many bad pictures around me, I have to come out from my "biasity" and write what need to be inspired.

In my next chapter of writing (The Lost Aborigine in His Own Country Home; 50 Years of Uncertainties), I will write a lot of tales and evidences of what the native's have suffered under the Federation of Malaya and feudalism practiced in our socio-politic arena. I wish that God will help me and give me inspiration, aspiration and might to write more.

The Bidayuh is well known by their courtesy, friendliness, shyness and their loyalty. They seldom revolt and question their right under the law of which they should do to protect themselves form oppression and marginalization. They have limited understanding of their needs and aspiration to be as equal or greater from others based on their solemn right constituted to them. Therefore, they always deny changes that they should adapt to in order to evolve with the current change of national's politics, economy and social which brought them into great marginalization and deprivation.

Politics of Development has put them into chaos and uncertainties although there is Native Customary Right Law available to protect them form aggressive modernization implementation made by their government. In many cases, the natives are force to abide to the development demand with no mutual agreement have been made to protect them from the oppression from the government in the name of economic prosperity and nation's harmony. They sacrificed a lot to the government to give way to other tribe to enjoy the economic prosperity. They have been displaced and misplaced but still they obey the rule and demand to help the nation to progress. This is how they contribute to the national economic growth but still they hidden from the government agenda.

Bengoh Resettlement issue is still not resolve and yet those affected residences already abandoned their homes to submerged. New settlement seems to be pending due to lack of government's intention to solve the issue within the agreed period of time. Compensation are given to each family to build their house and settle-down at Semadang resettlement sites, but still cannot accommodate their lost  in their submerged villages.

In the recent case  of new Gazetted Forest Reserved in Ulu Padawan, the Forestry Department gave less time to the villagers to discuss the order and decide either to accept or reject the order. The notice was given during Gawai Festival month where the villagers are busy with their festival preparation. Why should the government overlooked them and enforce authoritarian by all mean to gazette the villages into state reserve forest? I believe there is hidden agenda by the government to acquire this area since it is done is rushing time with no negotiation. In the other hand, the leaders and politicians have never informed the villagers about the matter as it may tarnish their political career and economic survival as minister, district officers, community chief and of course political runners for politicians.

Chief Minister of Sarawak once said that the native's should not demand compensation form any development project as development will bring prosperity to everyone. But, what is stated in the law must be respect so that no one are left unsatisfied. The natives are not anti-development but they are under-development and under-establishment based on proven scenario in ulu Baram, Kapit and Padawan. Perhaps the natives are ignorance, but that is not the way the government should describes them; ignorance aborigines. The government should not take advantage from the shortcomings of the natives as they should be served as citizens with equal rights or maybe greater right as origin of the forest.

This is a bad frame of loyalty given to the trusted government and it is proven that the native always being the victim of power exclusiveness, denial and deprivation. What more to lose? Where else to go? What else to harvest? Where else to have a peaceful habitat? We have to agree and understand that the natives could foil with the government development agenda only if they are well recognized and respect by the ruling government based on the rule of laws constituted and not by force and authoritarian.
Posted by Unknown at 10:52 AM